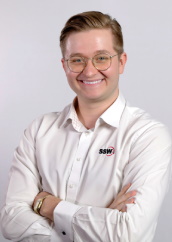 Andreas is an experienced Software Developer with a demonstrated history of working in the information technology and services industry.

Andreas has a passion for developing enterprise-grade Web Applications, and automating Build, Release and Testing with GitHub Actions and Azure DevOps Pipelines.

Development and DevOps aren't his only strong points. He is a highly motivated Scrum practitioner, strong team player and thinks outside of the box! Andreas has had great success in both starting new Scrum teams, and also upskilling and mentoring existing development teams.

Andreas has had experience with companies ranging from small businesses to large ASX listed companies in the finance, engineering and insurance sectors, helping them with:

Andreas is a trainer on the SSW Angular Superpowers Tour at major cities around Australia and Online, and has received top evaluation scores!