>SSW Rules
>
Rules to Better Bug Management and Product Feedback
Rules to Successful Projects
> Management - Is your client clear on the definition of a bug?

Management - Is your client clear on the definition of a bug?

The answer to this question can make or break contracts. We think that it's such a fundamental issue it has to be captured clearly. This is how we strictly define a bug. 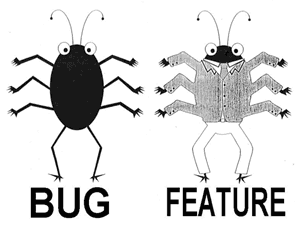 A software issue can be classed as a bug where:

Examples of what *could* constistute a bug:

Examples of what is *not* a bug:

Using a Work Tracking tool allows you to create work items such as user stories, bugs, tasks, test cases etc. Only create bugs for defects, faults, flaws, or imperfections that fulfill your definition of a bug. For everything else use other work item types.

Scrum wasn't designed for fixed price, fixed scope contracts, however, any new features or modifications (non-bug items) not in the original sprint or sprints are classed as additional work and are outside the scope of the contract. Any tasks which are bugs should be marked as additional items and be completed in the current sprint if possible. Most importantly, after the sprint plan has been sent, a PBI should NOT be entered as an item (additional or otherwise) in ANY sprints if they are not a bug. Instead, move all non-bug items to the product backlog for future review after the warranty period for the fixed price contract has passed.

Note: The above is our definition. Others have different definitions that we do not subscribe to: Painless Bug Tracking