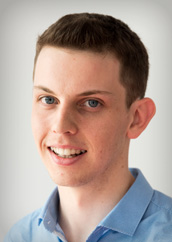 At SSW I have developed skills in web and application development, and I am interested in moving into the AI and data analytics space.
I am always looking for a new opportunity for learning. Having spent my university breaks working for SSW and completing their Firebootcamp, various CSU short courses and attending both .Net & SQL Server User groups.

At SSW I have primarily worked upon the Code Auditor project, which is a Web Forms desktop application and VS extension which helps developers maintain code quality in Visual Studio. I helped update the system to utilise the new Roslyn compiler and integrated it into more rules. I also added several features including automatic emailing services, reporting and a history of scans.

On firebootcamp I worked on an ASP.NET MVC with Angular web application called TimePro Invoicing. Over 9 weeks, myself and 8 other developers utilised Scrum to complete the project's major milestones.

One of my major projects at Sydney University had myself in a team of 6 working for EY (Earnst & Young). I was the solution architect for a web report which summarised the semantic analysis news articles compared to the movement of a selected companies stock price. This was achieved with SSIS scripts to download the stock and news data into a database, which was connected to an ASP.NET MVC application via Entity Framework. The front end used jQuery and D3 graphs, while the semantic analysis utilised IBM's Bluemix API. EY was very happy with the result and I earned a High Distinction in the course.

Another of my major projects at Sydney University was for the start-up DriveYello. Their product is an app which manages delivery drivers and our team of 6 worked on an analytical research project to try and determine how many delivery drivers they required on any night. We utilised Weka, SPSS and Excel to determine potential predicting factors. We found a pattern in the day of the week and produced a regression based algorithm in Python in order to automatically predict 2 weeks ahead. It was sufficiently accurate for our client, and I earned a High Distinction in the course.