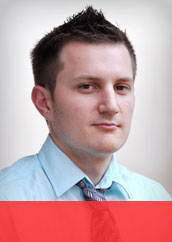 Matt Hodgkins is the hardest working man at SSW. He looks after any and all internal server issues while setting up virtual development environments for the other developers, and on top of this makes sure we are always running the latest version of any technology that comes out that Adam likes the look of.

Matthew started working at iiNet as soon as he finished his HSC, which is where he developed his troubleshooting and support skills.

He then moved to a small computer company called Dextralog Computers in his home town in Springwood, Blue Mountains. His role was to support over 40 small businesses, their servers, workstations and applications. During this time he finished his Diploma of Network Engineering at Mt Druitt TAFE.

Matthew now brings his experience and friendly attitude to SSW. His role is to keep all the systems running in top notch condition to allow the SSW developers to do what they do best without disruptions.