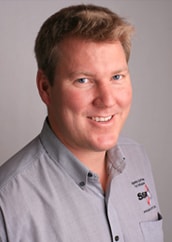 Cameron first joined SSW in January 2000 in a Business Development, Project Management and Administration role. He enjoys managing both clients and developers and is focussed on delivering projects and building strong relationships with clients.

Cameron has continued to work closely with Adam, developing and implementing systems for project management and internal management. Cameron actually enjoys making a significant contribution to SSW Rules :-) Cameron is proud to have witnessed the significant growth of SSW.

In 2004 Cameron continued his work project managing many complex and difficult projects, working for SSW in a consulting capacity.

In 2008 Cameron went back to full time study and completed a law degree at Newcastle University in which he attained First Class honours and wrote a dissertation on the commonality of contract law across a number of international jurisdictions. At the conclusion of his law degree Cameron was admitted to practice as a solicitor in the Supreme Court of New South Wales. His practice in the law was underpinned by his desire to improve systems and deliver results for clients in complex situations.

In 2014 Cameron returned to SSW in a full-time capacity to manage complex projects and strategy. He remains as a solicitor admitted to practice but don’t worry he does not act for SSW in such capacity :-)